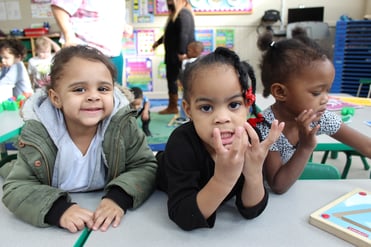 Not sure what a Head Start Program is? Let's break it down.

Head Start is a federal program that:

The roots of the program go back to January 1964 when President Lyndon B. Johnson announced a “war on poverty” during his State of the Union Address. At that time, nearly half of the people living in poverty in the United States were under the age of 12, so a war on poverty would need to have a significant focus on children. Johnson’s administration then proposed a series of initiatives to relieve poverty symptoms and then, ideally, to cure/prevent it from recurring. Congress passed these initiatives with cabinet agencies charged with creating and implementing programs to achieve them.

In response, a group of top experts developed a program to help communities meet the educational needs of disadvantaged preschoolers and to compensate for inequalities. The result was an eight-week Head Start program, used as a demonstration of what the program could do — and the government published the initial program regulations in 1975.

Experts designed Head Start as a comprehensive program that would provide children with free healthy meals and snacks, help them to catch up on their immunizations, and otherwise focus on their physical health to allow them to focus on social and educational elements of life.

As described by the Office of Head Start, “A key tenet of the program established that it be culturally responsive to the communities served and that the communities have an investment in its success through the contribution of volunteer hours and other donations as non-federal share.” Plus, Head Start preschool program centers often hired parents of participants as teachers’ aids. That way, the parents could participate in and better understand what their children learned — and then help their children at home to continue learning.

Since the program’s inception in 1965, more than 36 million children have benefitted from Head Start, a program that started as an eight-week test and now includes full-day services, year-round. Currently, Head Start programs across the nation serve more than 1 million children and their families.

The National Head Start Association lists links to and summaries of numerous studies that have shared benefits of this programming. Benefits include progress towards standards in literacy, language, and math for participants with higher scores in cognitive and social-emotional development when compared to control groups. Head Start participants also show better social skills and impulsive control with reduced hyperactivity and levels of aggression.

As adults, participants in Head Start programs are more likely to graduate high school and to attend college — even more likely to receive a post-secondary degree, or certification/license. They’re also less likely to be unemployed.